Major-power interventions in civil wars are extremely common: since the 1950s, close to half of the civil conflicts involve a major power and a third feature intervention by multiple powers. While scholars have amassed considerable evidence that rebel groups indeed anticipate the responses of potential interveners on the eve of conflict, the impact of an expected intervention, or lack thereof, on the likelihood of civil war is not well understood. Existing theoretical and empirical assessments are inconclusive. And historical examples abound suggesting interventions could both encourage and discourage the onset of conflict. For instance, Bosnian leaders openly admit that they anticipated Serbian retaliation and military dominance, but they repeatedly broke ceasefires in hopes of provoking wartime atrocities and an expected U.S. intervention. In contrast, the Brezhnev Doctrine asserted the right of the Soviet Union to intervene in other communist countries whenever counterrevolutionary forces threatened their way of life, and, in fact, Warsaw Pact membership perfectly predicts the absence of civil conflict during the Cold War.

At the heart of this puzzle is understanding rebels’ expectations about third-party intervention. Previous studies caution that even interventions with purely humanitarian motives may be misguided as they can create perverse incentives for rebel groups who otherwise would not mobilize for war. Weak groups may rebel only if they expect a third party to intervene and alleviate the costs of the eventual conflict. The Bosnian case offers a notable example of such incentives at play.

Reliably estimating intervention expectations, however, poses several conceptual and methodological challenges. First, it is difficult to find good proxies for these expectations, and previous attempts may suffer from reverse causality. For instance, the decision to station U.S. troops in a country (as a proxy for likely U.S. participation in a civil conflict) may be informed by its low latent risk of civil unrest. Furthermore, direct measures of expectations are typically based on evidence from countries that have experienced civil war, and extrapolation to other contexts may not be warranted. For example, the observed frequency of U.S. intervention in foreign civil conflicts could be explained through two channels:  on one hand, the U.S. may have a high underlying propensity for intervention due to its position on the international stage; on the other, if U.S. interventions are on average favorable to rebel groups, then civil wars may be more likely to erupt when rebels expect the U.S. to intervene.

Second, even unilateral interventions do not occur in isolation. Third parties anticipate each other’s actions due to the possibility of strategic interdependence. A major power’s intervention decisions, therefore, may have not only a direct effect on civil-war onset via their influence on local actors but also an indirect effect by encouraging or discouraging intervention by other powers. Understanding the net impact of expected intervention requires disentangling these effects.

In our paper, we develop a unified theoretical and empirical model of civil-war onset and major-power intervention. The intervention stage in our model is multilateral, with potential spillovers among major powers influencing their intervention decisions. This enables us to estimate expectations about major-power intervention from observed equilibrium behavior, using data from the second half of the twentieth century from both countries that experience civil conflict and those that do not.

Methodologically, our approach follows recent advances in extending standard discrete choice models to strategic settings. This has the added advantage of allowing us to organize within a coherent and familiar framework covariate previously shown to be robustly associated with civil-war onset and intervention. Moreover, our approach mitigates potential measurement errors that may arise if states have strategic incentives to hide the timing, scope, or scale of their interventions.

We have two major findings. First, consistent with the observed frequency of multilateral interventions, our estimates indicate that major powers generally have a stronger preference for intervening in a conflict if they expect others to do so as well. An important exception, however, is the relationship between the U.S. and France, which is characterized by free-riding incentives, as evidenced by France maintaining a sphere of influence in Africa during the Cold War. These results add nuance to previous studies and illustrate the value of moving beyond analyses that focus on a single major power or a subset thereof.

Finally, as shown in the figure below, we can compare standard proxies for anticipated interventions with the expectations implied by our model. The left panel is a box plot of predicted Russian intervention probabilities in civil wars were they to occur in countries that are nonmembers (left) and members (right) of the Warsaw Pact. The right panel is a scatterplot of countries where the horizontal axis corresponds to their average U.S. security hierarchy score and the vertical axis measures the predicted probability of U.S. intervention. Both proxies correlate with our estimated intervention probabilities in expected directions, but they miss important heterogeneity. For example, we find that the U.S. is more likely to intervene in civil wars if they occur in North Korea and Iraq than in Bangladesh and Sri Lanka, yet all four countries have identical (zero) hierarchy scores. The proxies likely capture potential interventions in support of host governments better than those supportive of rebels, an important distinction that our model is better able to disentangle. 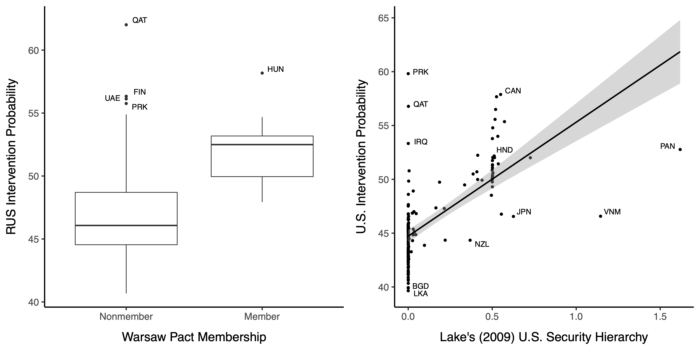 Overall, we hope our paper demonstrates and encourages non-conventional avenues by which formal models can be useful for future empirical research in political science.

This blog piece is based on the article “Do Major-Power Interventions Encourage the Onset of Civil Conflict? A Structural Analysis”  by Michael Gibilisco and Sergio Montero, forthcoming in the Journal of Politics,  April 2022.

Replication materials are available at The Journal of Politics Dataverse.

Michael Gibilisco is an Assistant Professor of Political Science at the California Institute of Technology. Mike’s research interests are formal political theory, comparative political economy, and political methodology.  His current research applies dynamic game theory to study the evolution of intergroup conflict, legislative policymaking, the selection of institutions, and their implications for minority rights.  More theoretically, he is interested in dynamic games and their associated aspects of equilibrium existence, computational tools, and structural estimation.  Other research includes non-Downsian models of elections and social choice. You can find further information regarding his research here.

Sergio Montero is an Assistant Professor of Political Science and Economics at the University of Rochester. Sergio’s research interests traverse political economy and comparative politics, with a special focus on how informational and strategic considerations impact the design, performance, and stability of democratic institutions. Methodologically, his work primarily relies on structural modeling and estimation. You can find further information regarding his research here.