In this year’s German federal election campaign, voters with an immigrant background, who constitute ten percent of the electorate, played a remarkably small role in the appeals and mobilization efforts of the major parties. When representatives of the Turkish community asked the Bundestag candidates about their positions on topics important to immigrant voters, less than half even responded. This raises the question of how responsive politicians are to immigrant constituents, especially when compared to ethnic German voters.

Our forthcoming article in the Journal of Politics examines this issue, which has relevance beyond Germany, the European Union’s most populous country. Throughout Western Europe, post-war immigration from the Middle East, Africa, and parts of Asia has diversified electorates. For example, twelve percent of the population in France is foreign-born and many within this group possess voting rights. Similarly, almost fifteen percent of the UK population is of ethnic-minority background. Thus, our research question is of importance for many European democracies that face the challenge of politically integrating a substantial number of immigrant-background citizens.

To investigate whether politicians discriminate against immigrant-background voters, we conducted a field experiment in the summer of 2018 involving more than 1,500 German state legislators. Each legislator received an email from a fictitious male constituent from their district. In the email, the constituent asked for a personal meeting during a visit to the state parliament. Crucially, we randomly varied the name of the constituent to signal a Turkish immigration background or an ethnic German background. We chose Turks because they constitute the largest immigrant group in Germany. In addition to the sender’s immigration background, we also randomized whether he was a supporter of the politician’s party or an undecided voter.

The type of research design we employed is called an audit study and it has been used in the social sciences to study racial and ethnic discrimination in labor and housing markets. Our design also closely follows previous work by political scientists who studied racial discrimination by state legislators in the US.

Overall, 69 percent of legislators responded to our request. However, they exhibited substantial bias in their response behavior: While ethnic German constituents received a response to 74 percent of their emails, the number for immigrant-background constituents is only 63 percent. Thus, an email request by an immigrant voter is eleven percentage points less likely to receive a response from a German politician compared to an otherwise identical email from an ethnic German voter (see Figure 1). 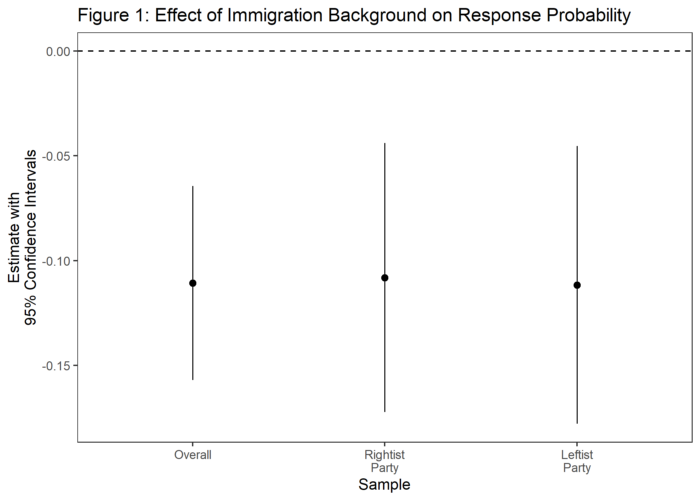 The bias against immigrant-background constituents extends to other outcomes we examined: Compared to an email sender with an ethnically German name, politicians are less likely to accept a meeting with the immigrant voter. Moreover, we find that replies to voters with Turkish-sounding names also tend to arrive later.

We also find that the magnitude of discrimination is almost identical among rightist (CDU/CSU, FDP, and AfD) and leftist (SPD, Greens, the Left) parties. This is a surprising result since leftist parties usually hold more immigrant-friendly policy positions. Our study suggests that this partisan difference does not translate to how politicians approach immigrant voters on the ground.

Finally, we also find suggestive evidence that signaling common partisanship with the legislator can mitigate the bias against immigrant-background constituents. Compared to requests by undecided voters, the penalty for having a Turkish-sounding name is six percentage points lower – a decrease of 44 percent – when the email mentions that the constituent is a convinced voter of the politician’s party (see Figure 2). This implies that highlighting a mutual political identity could potentially help minority constituents to gain access to their representatives. Nevertheless, it should be noted that discrimination against immigrant voters is still substantial (eight percentage points) when we restrict the comparison to partisan constituents. 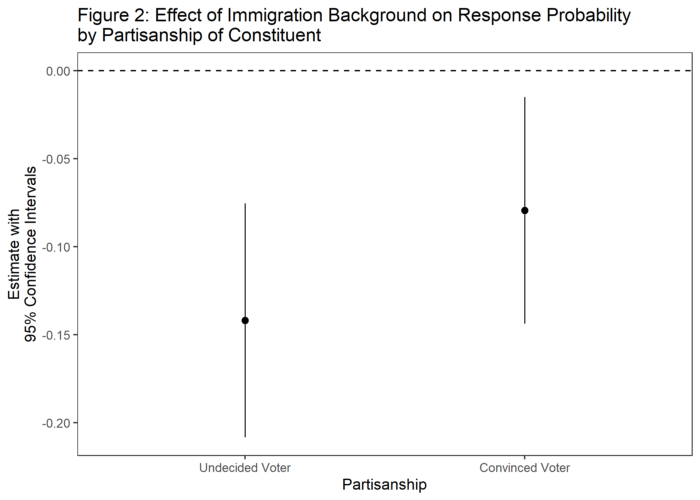 Taken together, our findings paint a rather bleak picture of politician responsiveness to immigrant voters. Not least since the refugee crisis of 2015, various European countries face the challenge of integrating large numbers of ethnically distinct immigrants, many of whom eventually gain the right to vote. Responsiveness of political elites to these new citizens can positively affect their trust in government and their feeling of belonging. Seen from this angle, our results are discomforting, as they suggest that on the dimension of legislator responsiveness, politicians from the right and the left might hamper rather than foster the political integration of immigrants.

This blog piece is based on the article “Do Politicians Discriminate Against Constituents with an Immigration Background? Field Experimental Evidence from Germany” by Jeyhun Alizade and Fabio Ellger, forthcoming in the Journal of Politics, July 2022.

Jeyhun Alizade is a PhD candidate in the Politics department at Princeton University. His research focuses on political parties and representation, the politics of immigration, and right-wing extremism in Europe.

Fabio Ellger is a researcher at the ‘Transformations of Democracy’ unit at WZB Berlin and a PhD candidate at Humboldt-Universität zu Berlin. He investigates questions connected to representation, participation, and polarization in today’s democracies. You can find further information regarding his research on his website and follow him on Twitter @FabioEllger