Over the past fifteen years, the US energy sector has been transformed by innovations in the extraction of natural gas from shale reserves. The combination of hydraulic fracturing and horizontal drilling – known colloquially as fracking – has increased the US share of natural gas production from shale gas from 1.6% in 2006 to 39% in 2020. Local communities rich in previously unobtainable shale gas find themselves in an economic boom, with economic studies finding robust increases in wages and employment.

This economic revolution has already left its mark on American politics, with fracking a prominent issue in the presidential primary and general election campaigns in 2020. Studies have also shown that members of Congress elected from fracking areas become more likely to be Republican, and to vote more conservatively on the environment, civil rights, and labor.

While fracking may bring positive economic benefits to communities, it also brings numerous second-order effects, such as decreases in formal education and declines in political competition. Taken together, we predicted that fracking would have varying effects: that it would decrease forms of participation more closely linked to education, such as voting, and that it would increase forms of participation linked to income, such as giving to campaigns. We also theorized that any participatory effects would skew in a way that benefited Republicans. For example, Democratic voters in fracking areas may become ambivalent, appreciative of Republicans’ pro-fracking stance and increasingly alienated from Democratic candidates’ pro-environmental positions.

To explore these questions, we combined zip code-level data on fracking wells with individual-level data on voter turnout and campaign contributions. The map below shows the total number of fracking wells opened between 1990 and 2016, by county. The Appalachian Basin (Marcellus shale play) in Pennsylvania and New York, the Fort Worth Basin (Barnett shale play) in Texas, and the Williston Basin (Bakken shale play) covering North Dakota and Montana show the most active shale gas and oil development.

We compared trends in participation between individuals living in areas that saw any fracking over the sample period, to individuals living in areas that never saw fracking, before and after the boom began in 2005. The top left panel in the figure below shows this comparison for voter turnout in presidential elections. The reference year is 2000. The coefficient for 2004 tells us that between 2000 and 2004, voters living in fracking areas did not see any differential growth in turnout compared to voters living in non-fracking areas. In 2008 and 2012, after fracking occurred, voters living in fracking areas see declines in turnout of one to two percentage points. In the top right panel, we see that we obtain similar results when we limit the sample to seven states with especially high fracking activity: Arkansas, Louisiana, North Dakota, Oklahoma, Pennsylvania, West Virginia, and Texas. Similarly, in the bottom panels of the figure, we see no significant differences in campaign contributions prior to the fracking boom, but sustained positive differences after the boom. 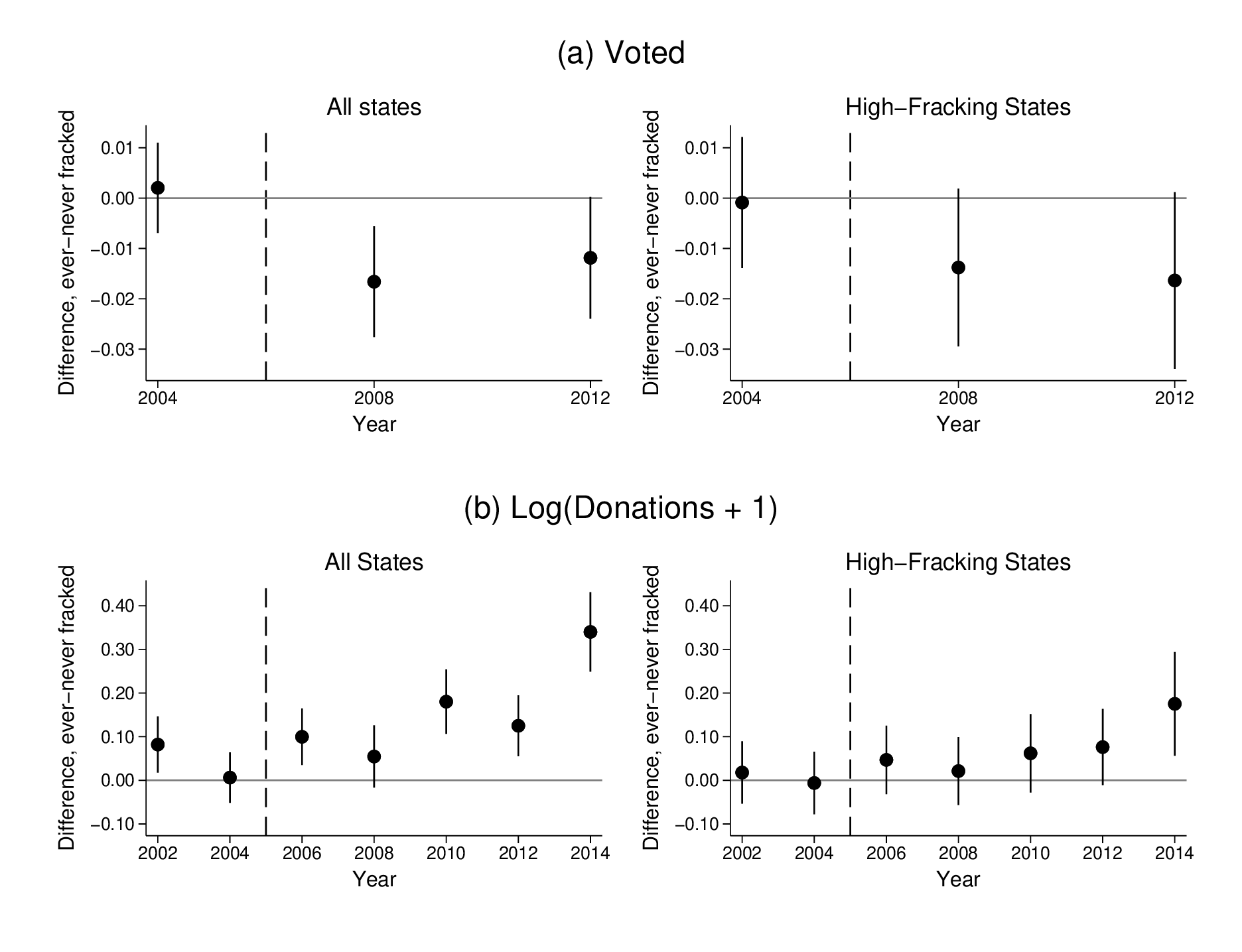 To study differential effects by party, we re-estimated effects on turnout for five different subsets of voters, ranked from least to most liberal within each state. The top panels in the figure below show the results. As voters become more liberal, we see more negative effects on turnout, as large as ten points for the most liberal voters. In the sample using all states, we see small declines for even the most conservative voters; in the sample of high-fracking states, we actually see slight increases for these voters. Overall, this evidence is consistent with the claim that fracking’s effect on turnout was especially negative for more liberal voters. 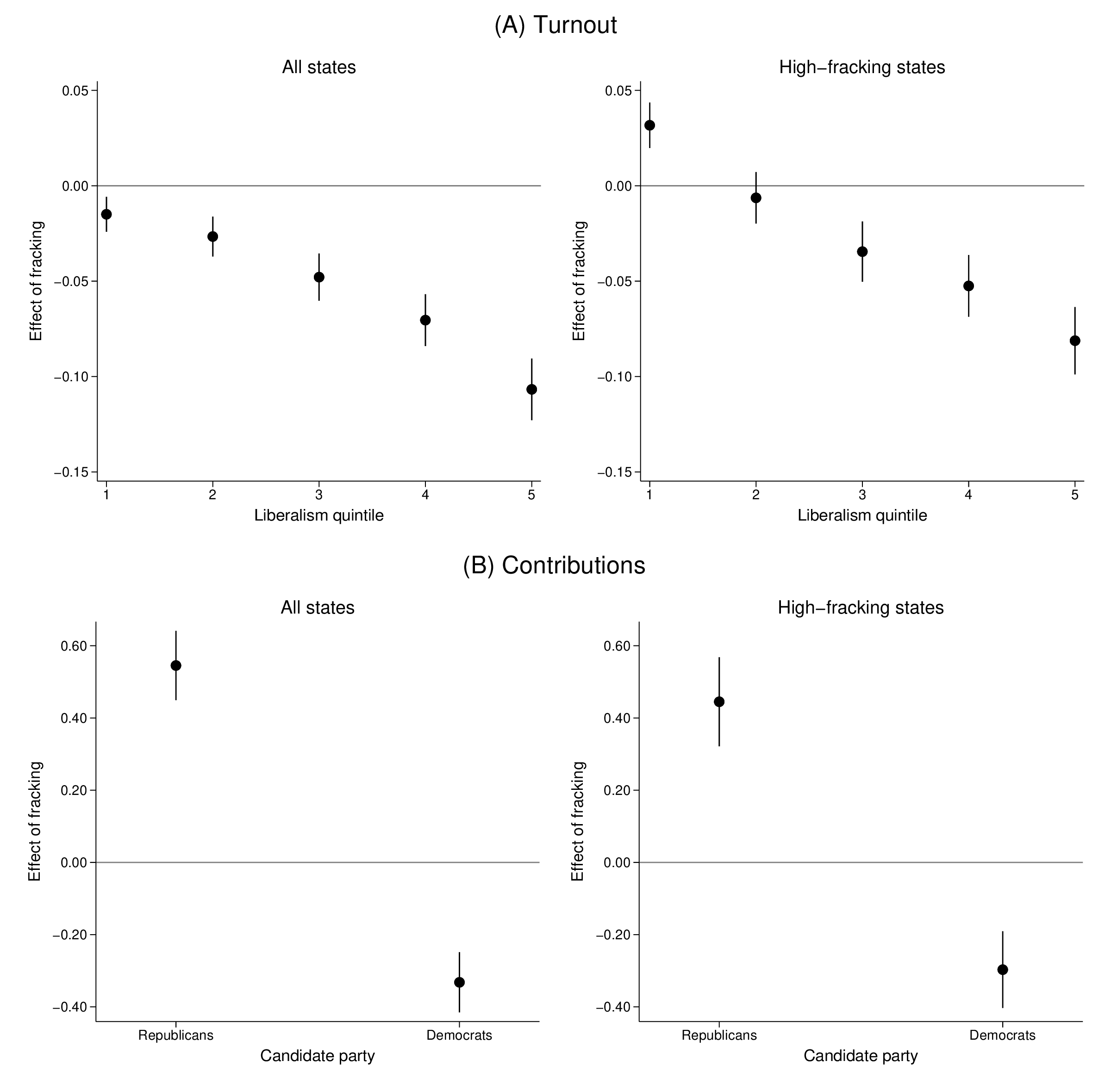 Our analysis reveals that, despite a substantial increase in income and wealth in fracking areas, fracking did not increase all types of political participation uniformly. Instead, the fracking boom has increased inequality in political participation. We show that the most common form of participation – turnout – decreased in fracking areas, and additional analysis suggests that declines in educational attainment combined with decreases in electoral competition after fracking booms may be responsible. In contrast, we find that individual donors increased their participation by increasing their contributions both to state and federal candidates.

Fracking’s impact on individual participation also has partisan consequences. The larger decline in voting by more liberal voters and the disadvantages that Democratic candidates suffered in fundraising after fracking booms provide a micro-explanation of the Republican Party’s electoral success and the increased anti-environmental voting records of elected politicians from fracking areas. In this regard, natural resources have been a blessing for one party, but a curse for another.

This blog piece is based on the article “Voters and Donors: The Unequal Political Consequences of Fracking” by Michael W. Sances and Hye Young You, forthcoming in the Journal of Politics, Volume 84, Issue 3.

Michael W. Sances is an Assistant Professor in the Department of Political Science at Temple University. His research interests include local politics, inequality, and political representation. You can find more information on his research here.

Hye Young You  is an Assistant Professor in the Wilf Family Department of Politics at New York University. Her research interests include special interest groups, money in politics, and local politics. You can find more information on her research here and follow her on Twitter: @hyeyoungyou