Can elected representatives control the decisions of unelected bureaucrats? In our forthcoming article, we argue that political competition can often make democratic control of bureaucratic policymaking more challenging than many appreciate. If the party that controls the bureaucracy’s appointments has different interests than the party that controls the bureaucracy’s appropriations, the appointing party may find it difficult to commit to a personnel management regime that supports the policy objectives of each. And if the appropriating party cannot trust the appointing party to support the policy objectives of each, they may respond in turn by allocating fewer resources to the bureaucracy than they otherwise would have done. This is important because if the parties in power fail to coordinate their actions, the result may be a public bureaucracy that is severely hampered from serving either’s interests.

Whereas the vast majority of works on bureaucratic politics have focused on the US case, we take advantage of the Swedish parliamentary chain of delegation to explore the link between bureaucratic appointments and appropriations empirically. Because the Swedish cabinet ministers generally appoint their agency heads on tenure-protected fixed- terms, we can use the parliament’s allocative provisions in the years following government turnover to investigate the budgetary response of their political competitors. As the government’s electoral cycle proceeds independently of the agency heads’ employment contracts, each fiscal year effectively carries a structure-induced variation in the types of agencies that the parties in power must face. In some cases, an agency’s leadership may have been appointed by an ideological ally of the winning legislative coalition. In other cases, the agency’s leadership may have been appointed by an ideological opponent of the winning legislative coalition. If our argument is on the right track, the difference in ideological relations should provide the governing parties with easily interpretable cues regarding the bureaucracy’s true policy objectives and, consequently, guide the allocation of government resources.

Using an original dataset with detailed information on a comprehensive sample of executive agencies in the Swedish central bureaucracy between 1971 and 2014, we show that political leaders match bureaucratic appointments and appropriations along distinctively partisan lines. Specifically, when the ministers that control the agencies’ appointments represent a different ideological bloc than the legislators that control the agencies’ resources, we estimate that the bureaucracy’s annual budgetary growth rate decreases from about 4% to about 2%, as illustrated in Figure 1. 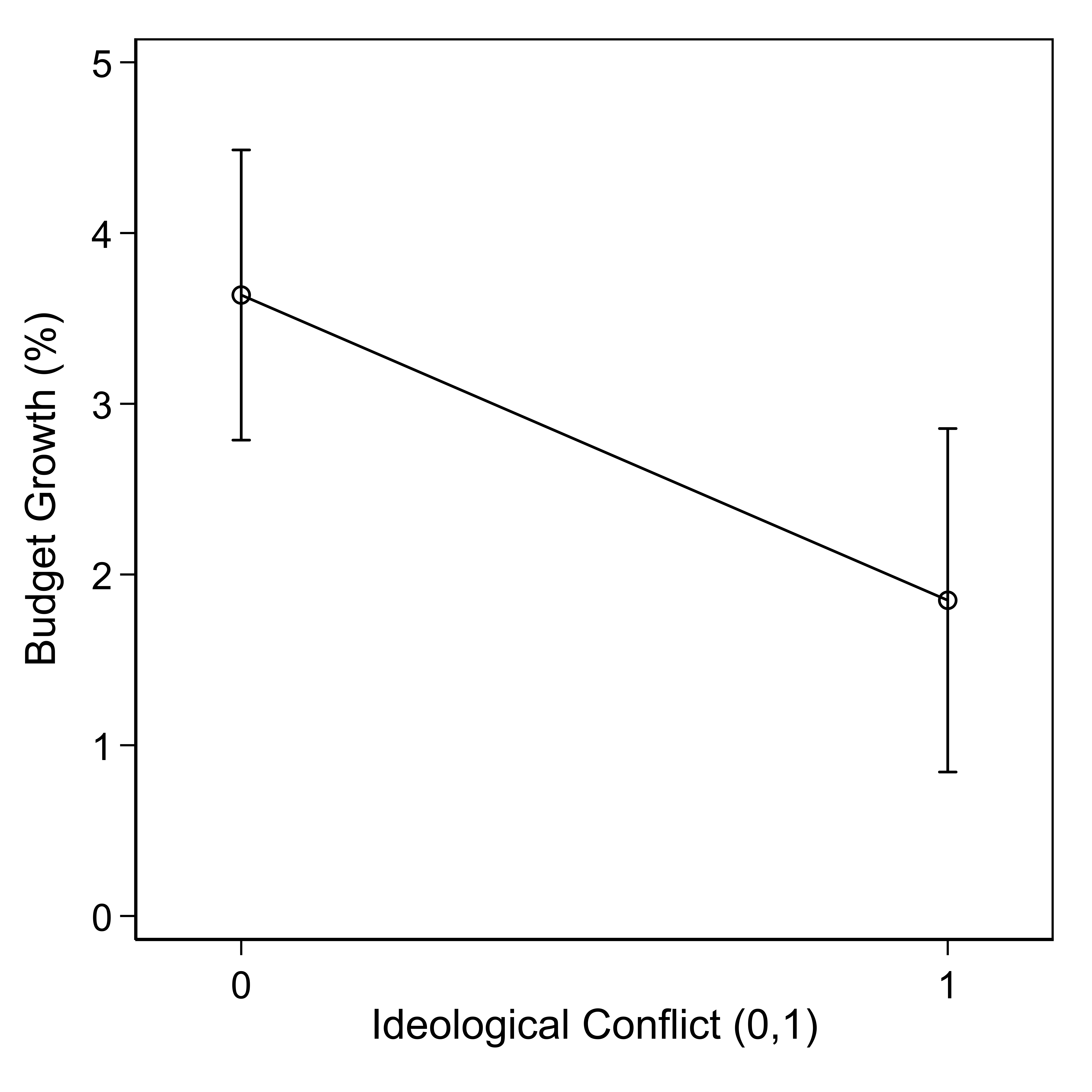 Given that the government typically invests billions of dollars in the bureaucracy every year, a marginal difference of around 2% implies that the governing parties can redirect hundreds of millions in response to potential policy conflicts—even in a relatively small country like Sweden. At a more fine-grained level, these results indicate that the ideological affiliation of an agency’s leadership can have appreciable implications for politicians’ willingness to support the agency. At a more general level, however, the difference also reveals how institutional arrangements that divide bureaucratic controls can generate enduring coordination problems. Because the appointments and appropriations processes can often be driven by different policy objectives, the relevant actors on both sides of the fence will often be just as concerned about limiting the other’s influence as they are about advancing their own legislative agendas.

Understanding how the institutional allocation of appointment and appropriation powers can affect government decision-making is integral to understanding the bureaucracy’s place in the broader democratic system. In presidential regimes, the constitutional separation of powers typically assigns the appointment prerogative to the president, while the legislature guards the treasury. Similarly, parliamentary regimes usually empower the cabinet ministers to manage the key appointments, while the parliament has the final say on the expenditures. Because of electoral competition and turnover, furthermore, these institutional divisions between the legislative and executive branches will often overlap with ideological divisions generated from the regular alternation of government incumbents. When scholars treat the political choice of bureaucratic appointments and appropriations as two independent decisions, as they often do, they implicitly treat both powers as unified under a single central command. Our arguments and findings imply that divided governments may often find it significantly more difficult to align the bureaucracy’s personnel and resources than unified governments, owing to the fact that everyone must then work under the constraints that their political opponents impose upon them.

This blog piece is based on the article “Loyal Leaders, Affluent Agencies: The Budgetary Implications of Political Appointments in the Executive Branch” by Carl Dahlström and Mikael Holmgren.

Carl Dahlström is a professor of political science and research fellow at the Quality of Government Institute, both at the University of Gothenburg, Sweden. His research is concerned with comparative and historical perspectives on bureaucratic politics and welfare state policymaking. You can find further information about his research here.

Mikael Holmgren is a senior lecturer of political science at Örebro University, Sweden. His research focuses on the organization of the legislative, executive, and judicial branches of government. You can find further information about his research here.