Presidents have numerous means to align the executive branch bureaucracy to execute their administration’s policy objectives through personnel choices and related policies. For example, presidents can shape executive branch personnel through the creation and movement of appointed positions (e.g., Civil Service Reform Act of 1978), the unilateral appointment of individuals (e.g., Non-Career SES and Schedule C positions), and unilateral directives which have indirect consequences on executive branch personnel (e.g., the Regulatory Policy Officer [RPO] appointee requirement provision of Executive Order 13422). Congressional influence over executive branch personnel choices is narrowly confined to the Senate’s confirmation of a relatively small subset of presidential appointees in key policy and administrative positions (henceforth, referred to PAS appointees). Once confirmed, Congress cannot revoke the terms of appointment for PAS appointees. Instead, Congress’s only recourse is to engage in both costly and imperfect ex-post monitoring through legislative oversight activities.

As Senate confirmation delay has steadily risen over time, the onus has naturally shifted to the governance problems that arise when presidents cannot have their executive appointees confirmed in a timely manner. In an era of rising political polarization that has often produced ‘high stakes’ bargaining between the president and Congress, the appointment process has become much costlier due to rising Senate confirmation delay that has adversely affected both the continuity and stability of executive branch operations.

In our forthcoming article, “Confirmation Dynamics: Differential Vetting in the Appointment of U.S. Federal Agency Leaders”, Jason S. Byers and I propose that the Senate has a strong incentive to reduce the risk associated with Type I (false-positive) confirmation errors by carefully vetting presidential nominees for upper-echelon political executive positions that have disproportionate influence over administrative governance. Because the confirmation decision is irreversible, the Senate seeks to differentially vet nominees based on the agency costs that they confront as a political principal. As the Senate’s potential agency costs rise, they will differentially vet Tier 2 nominees (assistant/deputy/under cabinet secretaries, under cabinet secretaries and directors, deputy directors/administrators, commission or board members) more vigorously than Tier 1 nominees (cabinet secretaries, administrator/director of full stand-alone agencies, commission or board chairpersons) given the Senate’s lesser capacity to effectively monitor and sanction these subordinate leadership appointees once they assume office compared to their supervisory counterparts.

We evaluate the Senate’s differential vetting calculus, rooted in the administrative hierarchy, associated with variations involving both political fragmentation and prospects for administrative responsiveness. Our ‘Due Diligence’ theory presupposes that political fragmentation between the president and Senate, as well as between the parties within the Senate chamber, makes it costlier for the Senate to commit Type I confirmation errors for Tier 2 nominees vis-à-vis Tier 1 nominees. Political fragmentation will, therefore, generate increasingly swifter confirmations for Tier 1 nominees compared to Tier 2 nominees as time elapses in the confirmation process. Similarly, this logic also presumes that the Senate will face greater obstacles when it comes to eliciting responsiveness from Tier 2 nominees vis-à-vis Tier 1 nominees whom enjoy greater decision-making independence or exhibiting stronger presidential loyalty. This differential vetting is also predicted to be increasing in the duration of the confirmation process.

Figure 2 from our article provides a graphical display of these key statistical estimates for purposes of evaluating the propositions derived from the ‘Due Diligence’ logic. Inspection of the far left panel offers evidence that rejects the differential vetting logic with respect to inter-branch policy conflict between the President and Senate at any of the estimated quantiles. We observe, however, that a large source of confirmation delay attributed to differential vetting between Tier 1 and Tier 2 nominees is the result of internal collective action problems within the Senate due to party polarization [second panel from left]. The Tier 1 − Tier 2 vetting differential for these set of estimates rises from 32 days for the conditional median overall confirmation duration [τ = 50, 38 days] to 52 days [τ = 75, 80 days], up further to 88 days [τ = 95, 190 days], before reaching its maximal impact of 162 days [τ = 99, 331 days].

In terms of administrative responsiveness, these conditional agency hierarchy effects with respect to agency decision maker independence [second panel from right] are statistically discernible for only the most highly protracted confirmation processes that are at least 136 days in overall confirmation duration [τ ≥ 90]. These differential vetting effects with respect to the presidential loyalty of the nominee [far right panel] are statistically significant for both moderate and protracted confirmation processes that require at least 68 days to attain a successful confirmation decision [τ ≥ 45]. 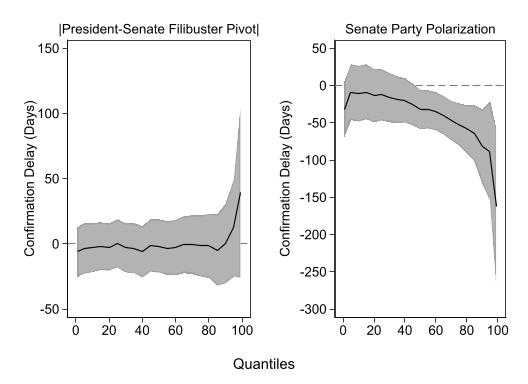 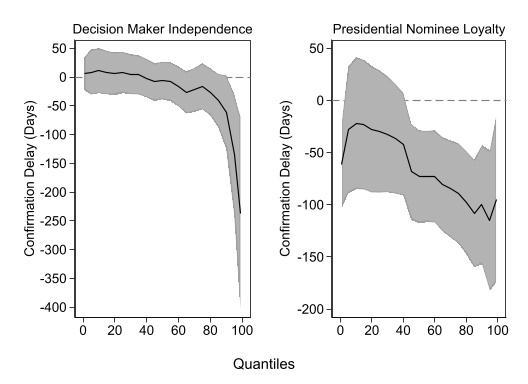 To summarize, the Senate’s confirmation delay of upper-echelon U.S. executive nominations reveal that this institution’s efforts at reducing moral hazard ex-ante by delaying confirmation of Tier 2 nominees relative to Tier 1 counterparts are rooted in overcoming its own collective action problems, and also the extent it views that the nominee will be responsive ex-post once assuming the bureaucratic leadership position. Further, we demonstrate in our article that most of the confirmation delay attributable to such differential vetting is not the result of a procedural delay on the Senate floor, but instead associated with the information vetting that takes place at the Senate committee stage of the confirmation process.

Our study underscores a fundamental point regarding the vital role played by the Senate confirmation process in the functioning of the U.S. federal government. Confirmation delay constitutes an inherent cost to democracy within a separation of powers system predicated on legislative checks on executive power. Although the Senate’s strategic exercise of its consent powers granted via Article II Section 2 of the U.S. Constitution is intended to reduce legislative accountability problems ex-post, it also necessarily hinders the executive branch’s capacity for effective governance.

This blog piece is based on the article “Confirmation Dynamics: Differential Vetting in the Appointment of U.S. Federal Agency Leaders” by George A. Krause and Jason S. Byers, forthcoming in the Journal of Politics, May 2022.

George A. Krause- The University of Georgia 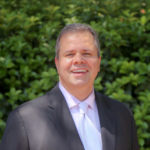 George A. Krause is the Alumni Foundation Distinguished Professor of Public Administration, Department of Public Administration and Policy, The University of Georgia. His primary fields of interest include U.S. executive politics, public administration, political economics, legislative politics, and subnational politics & policymaking.  His primary research activities center on understanding (1) organizational behavior, arrangements, and mechanism design both within and across government institutions (public bureaucracies, executive and legislative branches); (2) both the role and distribution of executive authority within U.S. federal and state governments; and (3) decision-making processes in the realm of both mass publics and governments. You can find further information regarding his research here. 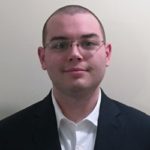 Jason S. Byers is Visiting Assistant Professor of Data Science, Department of Mathematics & Computer Science, and Department of Political Science, Davidson College. His primary fields of interest include U.S. executive politics, U.S. legislative politics, congressional elections, and data science. His primary research activities focus on the interbranch relationships between the executive and legislative branches and the role that congressional elections have in shaping representation. You can find further information regarding his research here.