In November 2015, the Syria-based Islamic State terrorist organization perpetrated a large series of attacks in Paris, France, at a rock concert, football stadium, and the city’s cafes and restaurants. The attacks were the largest in an advanced democracy in over a decade and resulted in the deaths of 130 civilians. The attacks also coincided with the Syrian refugee crisis, the largest refugee crisis since the end of the Second World War. The event would tightly intertwine two of the most salient issues in international politics: the fight against terrorism and the large-scale resettlement of refugees.

Because refugee resettlement is a highly sensitive political issue, our article, “Does International Terrorism affect Public Attitudes toward Refugees? Evidence from a Large-scale Natural Experiment”, investigates the effects of these attacks on the public’s attitudes toward domestic acceptance of refugees. Do terrorist attacks abroad affects attitudes toward refugees in one’s own country? If so, how large are these effects and how long do they last? Finally, does terrorism mobilize the public to voice their opinions about refugee resettlement to their political representatives?

Providing causal evidence to answer these questions is difficult. Public opinion data are often too few around the time of terrorist events, and survey respondents who respond after such events may differ from those who respond before them. Our research overcomes these problems by using data from a large national survey fielded in Canada—a large recipient of refugees—less than 48 hours before the attacks, and each day for three weeks thereafter. The sample size is exceptionally large: 18,634 respondents completed the survey across the three-week period. The survey contained a wide range of questions specifically concerning Syrian refugees. A broad set of checks show that respondents who responded to the daily survey invitations before and after were effectively identical.

Given the size of the data, it is straightforward to show graphically the immediate effects of the attacks and their duration. We examine the effect on the public’s anxiety and sympathy toward Syrian refugees; perceptions of Syrian refugees as a security and cultural threat; and attitudes toward whether Syrian refugees should be allowed to resettle in the country. Finally, we investigate whether the attacks increased the public’s willingness to contact their Member of Parliament about refugee resettlement.

The graph below shows the effect of the attacks on anxiety and sympathy toward Syrian refugees, measured with a combined set of questions (an index) that measure each emotion. Each point in the graph is a two-day average. Clearly, the attacks caused a substantial increase in the public’s anxiety about the resettlement of Syrian refugees in the country, without a meaningful change in sympathy for those refugees themselves. The effect on anxiety is short-lived: it rebounds in a clear pattern to its level before the attacks within less than two weeks.

Did the attacks affect the public’s attitudes toward policies concerning accepting refugees? The graph below shows that the attacks also caused a decrease in public willingness to settle Syrian refugees in the country. We estimate that the attacks caused a 4.2 percentage point drop in support for refugee resettlement overall. And again, the effect is short-lived. 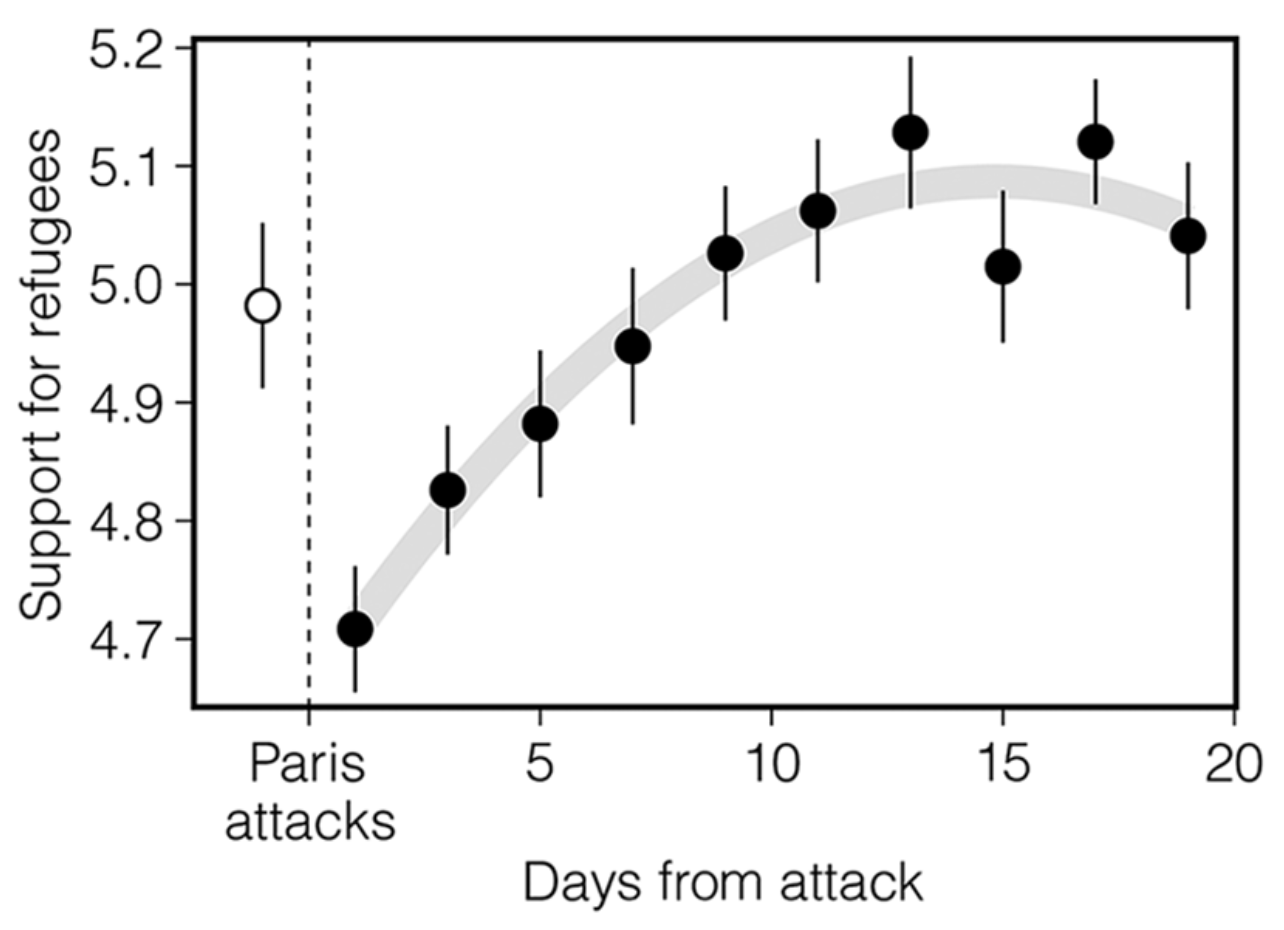 Finally, we examine whether the Paris attacks increased public mobilization (willingness to contact an MP) around the issue of refugee resettlement and whether those who oppose or support refugee resettlement mobilized to different degrees. The graph below demonstrates that opponents of resettlement were substantially more likely to mobilize as a result of the attacks compared to refugees’ supporters (a 10 percentage point difference). 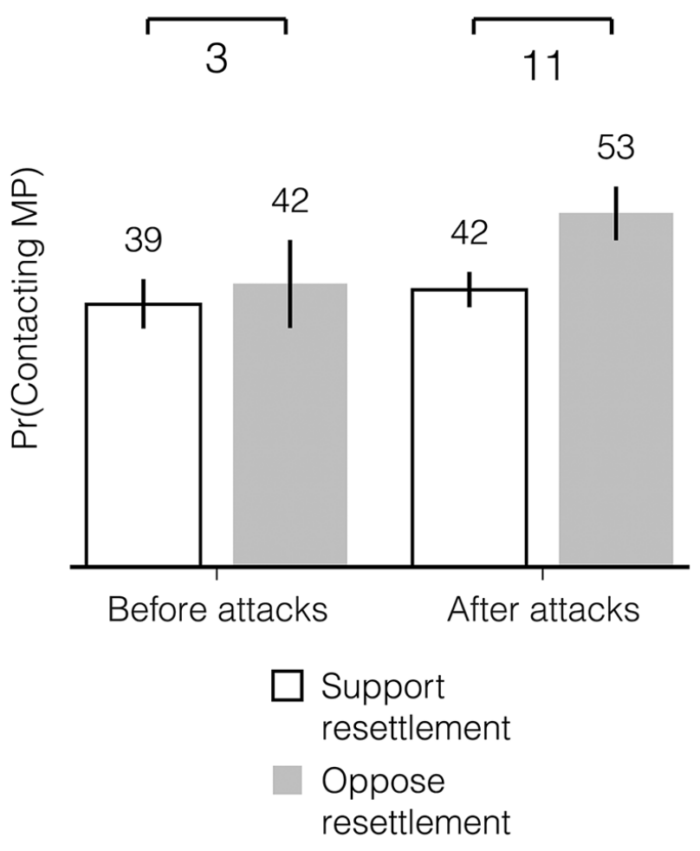 These results show that public opinion regarding refugees is resilient to what were dramatic, widely internationally publicized terrorist attacks. The attacks increased public anxiety about resettlement and fears about refugees representing security and cultural threat. They decreased support for refugee resettlement. And yet these effects were decidedly short-lived. Importantly, the public’s increased fears about refugees did not result in a decrease in sympathy for the plight of the refugees themselves.

But if the effects of the attacks were relatively moderate and ephemeral, what explains the substantial increase, at the time, of vocal opposition to resettlement in public discourse among politicians and political commentators? The results suggest that even if terrorism may shift policy preferences only modestly, it can also result in large asymmetries in mobilization. The willingness of the public to contact a politician about resettlement increased substantially among refugee’s opponents but did so little among their supporters. This highlights an important complication for the democratic process: if politicians are responsive to public opinion on refugees, the signal that they receive from the public will, in part, come from the public mobilizing effects of terrorism. If mobilization differs between a policy’s supporters and opponents, however, then as a measure of opinion that signal will be misleading: growth in expressed opposition to refugees may increase even if attitudes shift little or not at all. During such events, this suggests that if one is supportive of refugee resettlement, counter-mobilization strategies may be key, with an awareness that public sympathies for refugees themselves are likely still intact.

This blog piece is based on the article “Does International Terrorism affect Public Attitudes toward Refugees? Evidence from a Large-scale Natural Experiment” by Charles Breton and Gregory Eady, forthcoming in the Journal of Politics, January 2022.

Charles Breton is the executive director of the Centre of Excellence on the Canadian Federation at the Institute for Research on Public Policy (IRPP) and the former research director at Vox Pop Labs. Follow him on Twitter: @charlesbreton

Gregory Eady is an Assistant Professor of Political Science at the University of Copenhagen and the Center for Social Data Science (SODAS). His research focuses on social media, political behavior, and statistical and research methods. You can find further information regarding his research here and follow him on Twitter: @GregoryEady