The relevance of the provisions of adequate public services for the material living standards of citizens and the long-term economic trajectories of countries is an important theme of political economy. Social scientists broadly agree that equal access to high-quality public goods, services, and infrastructure decreases inequality, promotes economic development, and improves the well-being of citizens. Existing studies on distributive politics and its welfare consequences vary widely in their geographic scope and substantive focus. Still, an overwhelming majority of this work assumes states have an absolute monopoly on public service delivery.

However, the state is not the only supplier of public services. The economic elite’s voluntary endowments are one of the oldest and most prominent forms of public service provision. States collected taxes to finance wars and sustain armies, not necessarily to provide sanitary drinking water or education before the emergence of formal welfare institutions. The economic or the religious elite often invested in such projects. The notion that the noble and wealthy citizens owe an obligation to take care of their communities was the main driver of investments in public infrastructure and social safety nets before the twentieth century. Although governmental investments have replaced philanthropic endowments for service provision in many advanced capitalist countries, most places in the global south still rely on the wealthy elites’ charitable provisioning of local public goods.

The rich usually claim to endow funds to charitable causes to decrease inequalities created by or cannot be corrected through state institutions. Scholars who work on philanthropy argue that the rich invariably serve their material interests. Given the tension between these self-reported and attributed motivations, important questions emerge. What are the distributional implications of the philanthropic provision of public amenities? How does ethno-religious diversity affect the charitable distribution of public goods, especially when the rich and powerful are likely to be members of relatively privileged ethnic or religious groups? How does within-group inequality affect who gets what? Can the rich provide equal access to public services that profoundly impact the quality of life, educational attainment, and life expectancy across social and ethnic groups? Or do they reinforce existing inequalities?

In my paper “Distributional Consequences of Philanthropic Contributions to Public Goods: Self-Serving Elite in Ottoman Istanbul,” I answer these questions through an original data set from 1868 on water fountains built and maintained through the Muslim elite’s voluntary and charitable contributions in Ottoman Istanbul. Ottoman Istanbul is an ideal empirical setting to measure the distributive impact of elite endowments. First, Istanbul has no natural sources of drinking water within the city and, throughout its history, has depended on outside water resources. Second, during the Ottoman period, all public goods and infrastructure were supplied through the philanthropic contributions of the Muslim elite. More importantly, the city’s population was divided along strict social and ethno-religious lines. Without water connections to houses, the Muslim elite made water available to non-Muslims (Christians and Jews) and Muslim commoners.

My findings show that elites’ philanthropic provisioning of social services can reproduce existing inequalities. I demonstrate that the Muslim elite provided more clean drinking water to Muslim and elite neighborhoods, which were already advantaged communities compared to non-Muslims and commoners. The figures below show the heat map of fountains in Ottoman Istanbul. Dark areas are the hottest spots, while light areas represent the coldest spots, respectively. What is striking about these two figures is that they clearly show elite neighborhoods fall on hot spots while non-Muslim neighborhoods tend to be on cold spots. The darkest spots are inhibited by elites, whereas the lightest spots are the regions with non-Muslims. 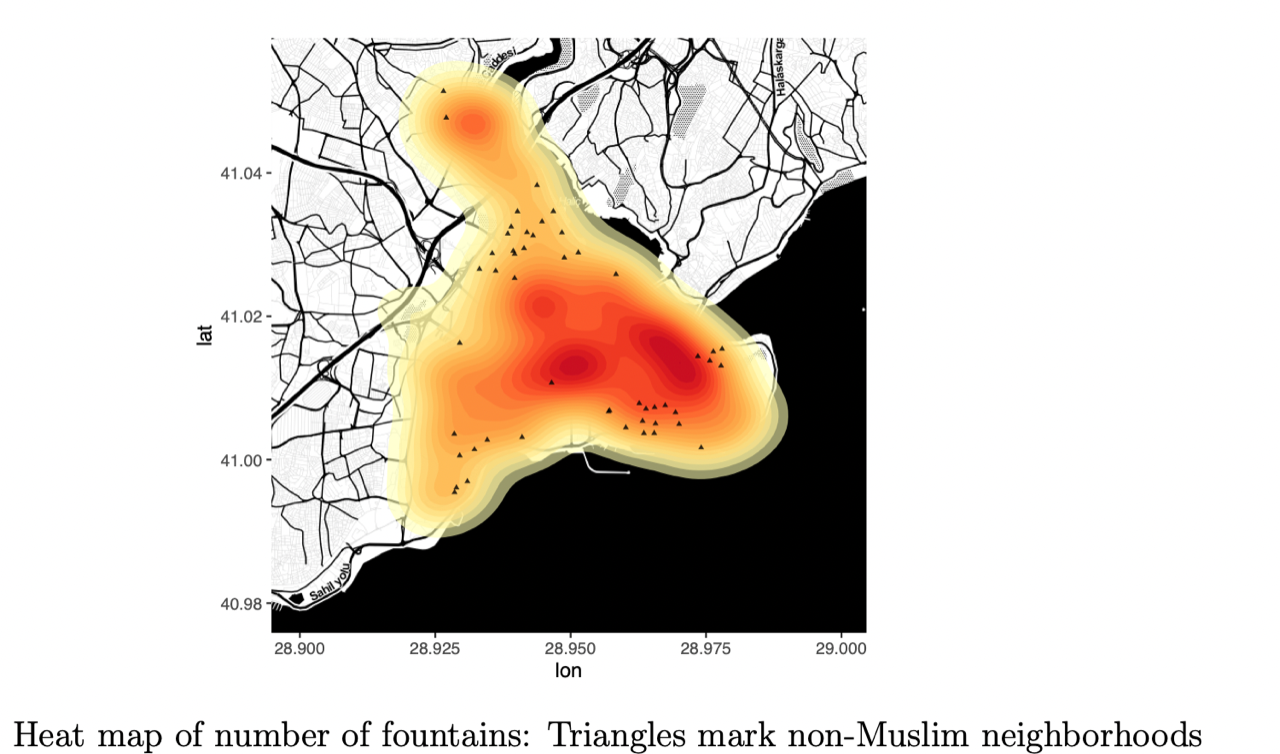 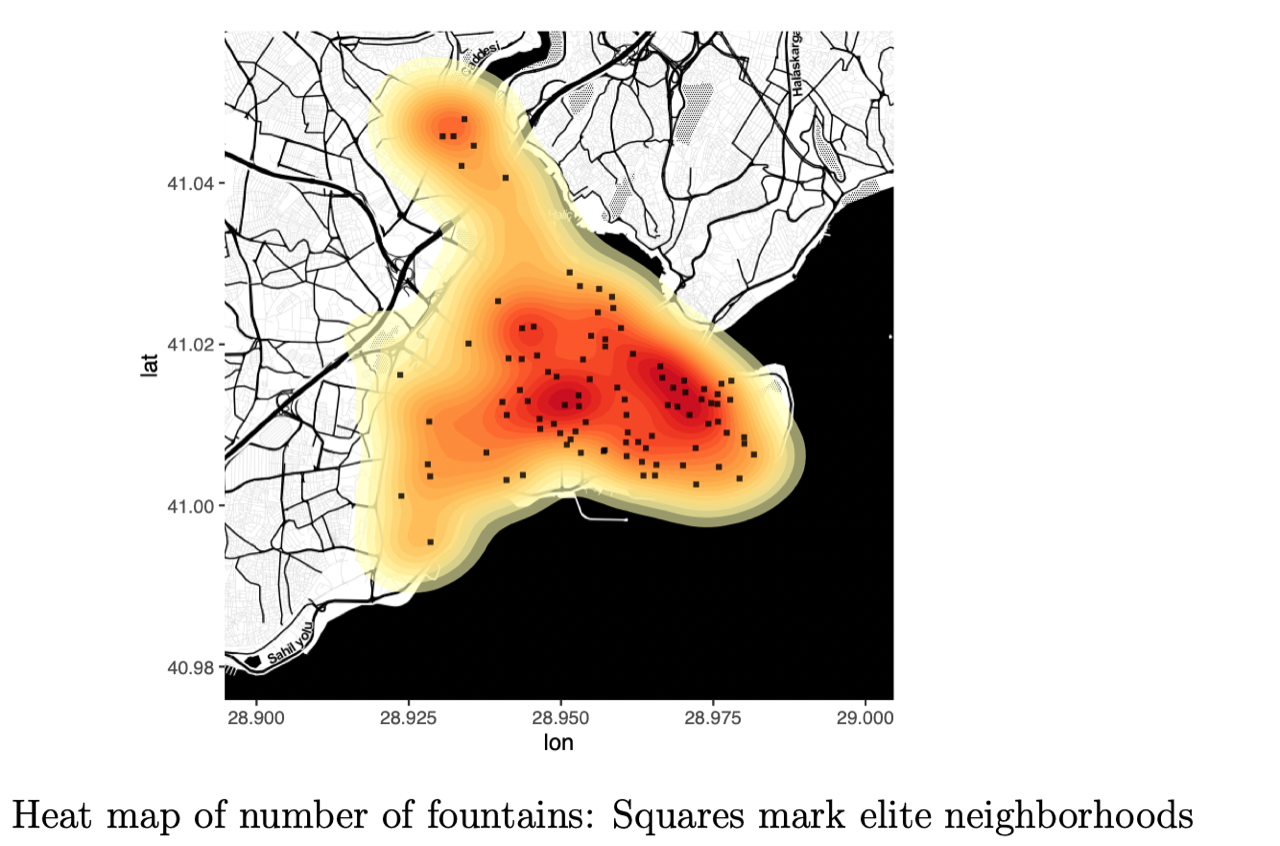 Can equal access to philanthropically funded public services ever be achieved in ethnically and socially heterogeneous societies? Are the research results unique to and consistent with the institutional and demographic characteristics of the Ottoman Empire? While this paper’s results relate to biases evident in Ottoman Istanbul, its findings are more broadly relevant. This paper’s theses predict that only in settings where ethnic groups have equal financial and social power, equitable social mobility prospects, and no residential segregation, philanthropic endowments to public institutions could yield equitable benefits.

However, these scope conditions are rarely met. Historically, most countries had ethnically diverse populations with institutionalized class differences. In addition, the opportunity for social mobility among groups of different ethnic and social backgrounds was and is scarce, even in developed societies. Therefore, the themes explored in this paper help understand persistent inequalities in other parts of the world. The question of why many university buildings, symphony halls, institutes, and stadiums were, and still are, named after their wealthy and powerful benefactors and placed at elite institutions or localities rather than at less well-resourced facilities highlights the importance of this paper’s findings.

This blog piece is based on the article “Distributional Consequences of Philanthropic Contributions to Public Goods: Self-Serving Elite in Ottoman Istanbul”  by Aslı Cansunar, forthcoming in the Journal of Politics, Volume 84, Issue 2. 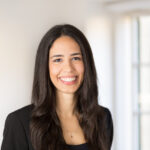 Aslı Cansunar is an Assistant Professor of Political Science at the University of Washington. She studies the political and social consequences of economic inequalities. Most of her research is concentrated in advanced industrialized countries and the Middle East. You can find more information on her research here and follow her on Twitter: @aslicansunar