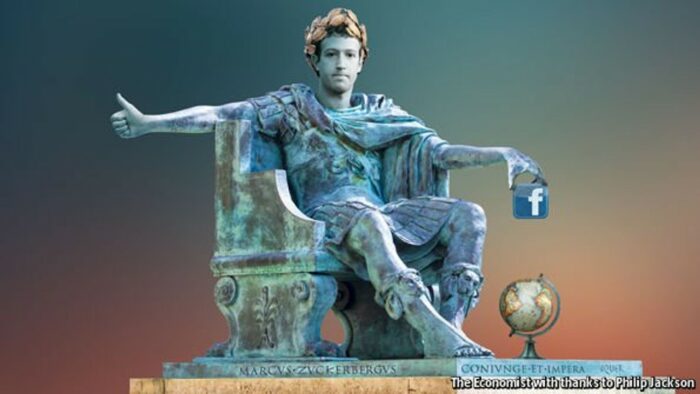 On the front cover of one of its 2016 issues, The Economist depicted Facebook’s CEO Mark Zuckerberg in the guise of an emperor. It explained the choice thus:

Not since the era of imperial Rome has the “thumbs-up” sign been such a potent and public symbol of power. A mere 12 years after it was founded, Facebook is a great empire with a vast population, immense wealth, a charismatic leader, and mind-boggling reach and influence.

Particularly striking given the source was the focus on corporate power, a category which the so-called “Chicago school” of economics had worked hard to displace from both antitrust and the theory of the firm. Partly as a result of the rise of big tech companies, but also more generally in the long shadow of the global financial crisis, the corporate-titan-as-supervillain is back on the cultural and political agenda.

Stretching the monarchical metaphors a bit further, the concerns of modern critics about corporate power in a democracy are reminiscent of the unease mediaeval thinkers felt about exceptionally powerful aristocrats like Simon de Montfort and John of Gaunt. These “overmighty subjects” threatened the order of the day by constituting a power within the realm that was independent of the monarch, and perhaps insubordinate to the monarch. Modern mega-corporations are the overmighty subjects of today, exercising power independently of the democratic state, and even shrugging off the demands of the state or subverting the state’s own power.

Contemporary critics of corporate power (at least within political theory) focus on one particular response: bringing corporations under democratic control. To the political theorist trained to wield the hammer of democratic accountability and constitutional rights, every powerful entity looks like a nail. Theorists have therefore been enthusiastic about plans for democratising corporate governance along the lines of Germany’s ‘co-determination’ system, in which unions appoint half the members of a company’s supervisory board.

However, other options are available. Instead of taming concentrations of power in the economy using means imported from the government, we could instead try to break up these concentrations of power within the economy. This was the vision of the original anti-trust movement in the late nineteenth century USA. Their remedy for corporate power was market competition (enforced by competition/antitrust agencies).

The third response, hiding in plain sight, is to accept corporate power as a necessary evil.

Why might this seem an attractive option? All three responses come with costs.

Let’s start with the downside of democratising corporate governance, which we call the ‘accountability’ strategy. In any situation where some ‘agent’ works on behalf of some ‘principals’, inefficiencies arise. Agents cannot always be trusted to do what the principals want. For a principal, monitoring agents and incentivising them is costly and can sometimes have perverse consequences. These costs tend to increase when there are multiple principals, and especially when there is a greater diversity of interests among the principals. This causes more disagreements about the firm’s direction that need to be settled, and makes it harder for principals to keep track of management’s performance.

Turning to the strategy of competition, allowing firms to grow larger often allows them to take advantage of economies of scale, making them more internally efficient. Breaking up big firms to facilitate competition can therefore mean forgoing these economies of scale. The growth of technology firms (social media especially) owes much to network externalities, a phenomenon where customers derive more benefit using services with more other users.

The case for allowing powerful companies as a necessary evil emerges from considering the costs of the two alternatives: if agency costs and inhibited economies of scale cause serious inefficiencies, powerful firms might be for the best after all.

The diagram sums this up. Each corner represents one of the ideal-typical strategies of accountability, competition and powerful firms. Each of these is incompatible with a certain goal, represented by the opposite side the of the triangle. The space in the middle represents a menu of mixed options. The closer a point is to a side, the more that option promotes the goals which that side represents. For example, the ideal-typical accountability strategy (A) is right up against the sides representing power balance and economies of scale, showing that it promotes these goals as fully as possible. However, this point is also as far away as possible from the goal of minimal agency costs, showing that the accountability strategy performs as poorly as possible on this goal. 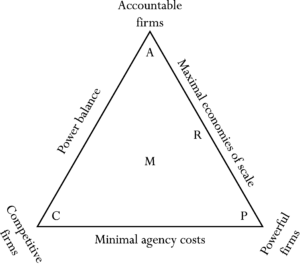 ‘Power balance’ is our label for drawback of powerful firms. The costs of accountability and competition were both cashed out in straightforwardly economic terms (agency costs and missing economies of scale), and we could do the same for power balance, using the economic analysis of the inefficiency of monopoly power. However, power balance could also be interpreted in other ways: as a contributor to distributive equality, and as part of social/relational equality. If we endorse these additional reasons for power balance, power balance will weigh more heavily in the trade-off.

This blog piece is based on the article “The Corporate Power Trilemma”  by Michael Bennett and Rutger Claassen, forthcoming in the Journal of Politics, October 2022. 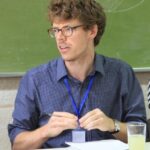 Michael Bennett is a Teaching Associate at the University of Nottingham. He is a political theorist/philosopher in the interdisciplinary tradition of politics, philosophy, and economics. His work focuses on the relationship between capitalism and democracy, the political theory of the corporation, and the epistemic justification of democracy. You can find further information regarding his research here. 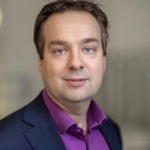 Rutger Claassen is a Professor of Political Philosophy and Economic Ethics at Utrecht University. Rutger is a political philosopher working on issues like the limits of markets, the nature of property rights, and theories of social justice. He currently runs a large research project on the political theory of corporations. You can find further information regarding his research here and here.