What explains legislative effectiveness in presidential systems where executives often lack majority support in the legislature? In most presidential democracies, executives are the primary lawmakers and agenda-setters. Yet, we know little about the relative significance of bills produced by individual legislators, nor their ability to advance them through the legislative process. Drawing on data from Mexico’s lower house, we address this question in our recent Journal of Politics article, “Legislative Effectiveness in Multiparty Presidential Systems: Evidence from Mexico’s Chamber of Deputies.”

In most presidential systems, there is no majority party, committee chairs are shared across multiple parties, and legislative careers are often short. Thus, seemingly obvious explanations that might suggest legislators from the majority party, or those with more experience, are more effective, may hold little explanatory power. Moreover, existing work is mostly limited to a focus on legislative productivity, and has not examined the importance of legislators´ bills.

In the article, we find that opposition legislators, rather than legislators from the President’s party, are some of the most effective lawmakers in the Mexican Congress. We argue this surprising finding can in large part be explained by presidential strategies to gain majority support in the legislature for presidential initiatives.

To provide support for our argument, we draw on bill sponsorship data from Mexico’s Chamber of Deputies across four separate presidencies, from 1997 to 2018. We also develop a measure of legislative effectiveness that captures how far each bill advanced in the legislative process, and the significance of the policy changes proposed in each bill. Each individual legislator is then provided with a summary score that captures their relative effectiveness compared to their colleagues in their ability to advance important bills through the legislative process.

In the graph below, we predict the average legislative effectiveness score for 4 categories of legislators: 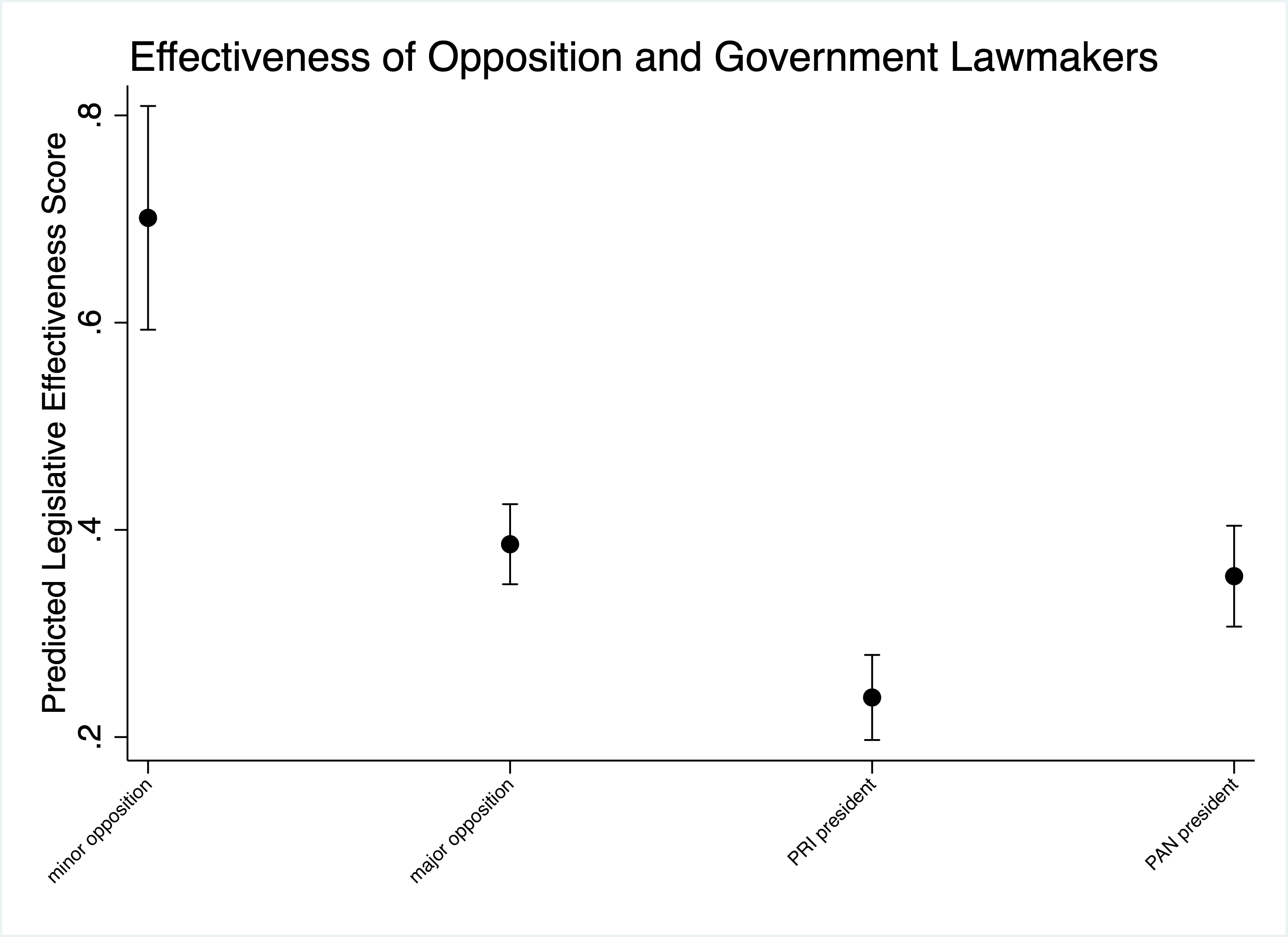 Our results hold if we limit the analysis to only those legislators who have served in both the government and the opposition. For the period covered here, there are a number of lawmakers from the PRI and PAN who have served at least one term in the opposition and one term while their party controls the presidency. When we look at the effectiveness of these legislators, we still find the same individual is a more effective lawmaker when they are part of the opposition compared when they are part of the governing party.

Our findings cast doubt on previous scholarship which suggests presidential co-partisans tend to be more effective lawmakers than members of the opposition. While the results are limited to Mexico, our findings challenge convention wisdom about legislative effectiveness, and more work should be undertaken that considers the relative substance of the bills being advanced by opposition and government legislators.

We also find previous explanations of legislative effectiveness in the U.S. Congress do not travel well to other contexts. Past work has found that majority party status, seniority, experience, and possession of leadership positions are key explanations of effectiveness. However, in the context of a non-majoritarian, multi-party legislature, findings differ substantially. The only similarity we find with the U.S. case is that lawmakers with leadership positions are more effective. We also do not find legislative experience to be a particularly important factor in explaining effectiveness. Across Latin American legislatures, deputies serve few consecutive terms. Given that legislative experience does not appear to be very important, future work should focus on what other background characteristics deputies bring to the legislature that better explain variations in effectiveness.

This blog piece is based on the article “Legislative Effectiveness in Multiparty Presidential Systems: Evidence from Mexico’s Chamber of Deputies” by Sergio A. Bárcena Juárez and Yann P. Kerevel, forthcoming in the Journal of Politics, Volume 84, Issue 4.

Sergio A. Bárcena Juárez is an Associate Research Professor at Tec de Monterrey, Mexico City. He is also the Director of Buró Parlamentario. His research focuses on legislative behavior in the Mexican Congress. You can find more information on his research here and follow him on Twitter: @SergioAbarcena

Yann P. Kerevel is an Associate Professor of Political Science at Louisiana State University. His research focuses on descriptive representation, legislative behavior and electoral systems. You can find more information on his research here and follow him on Twitter: @ykerev